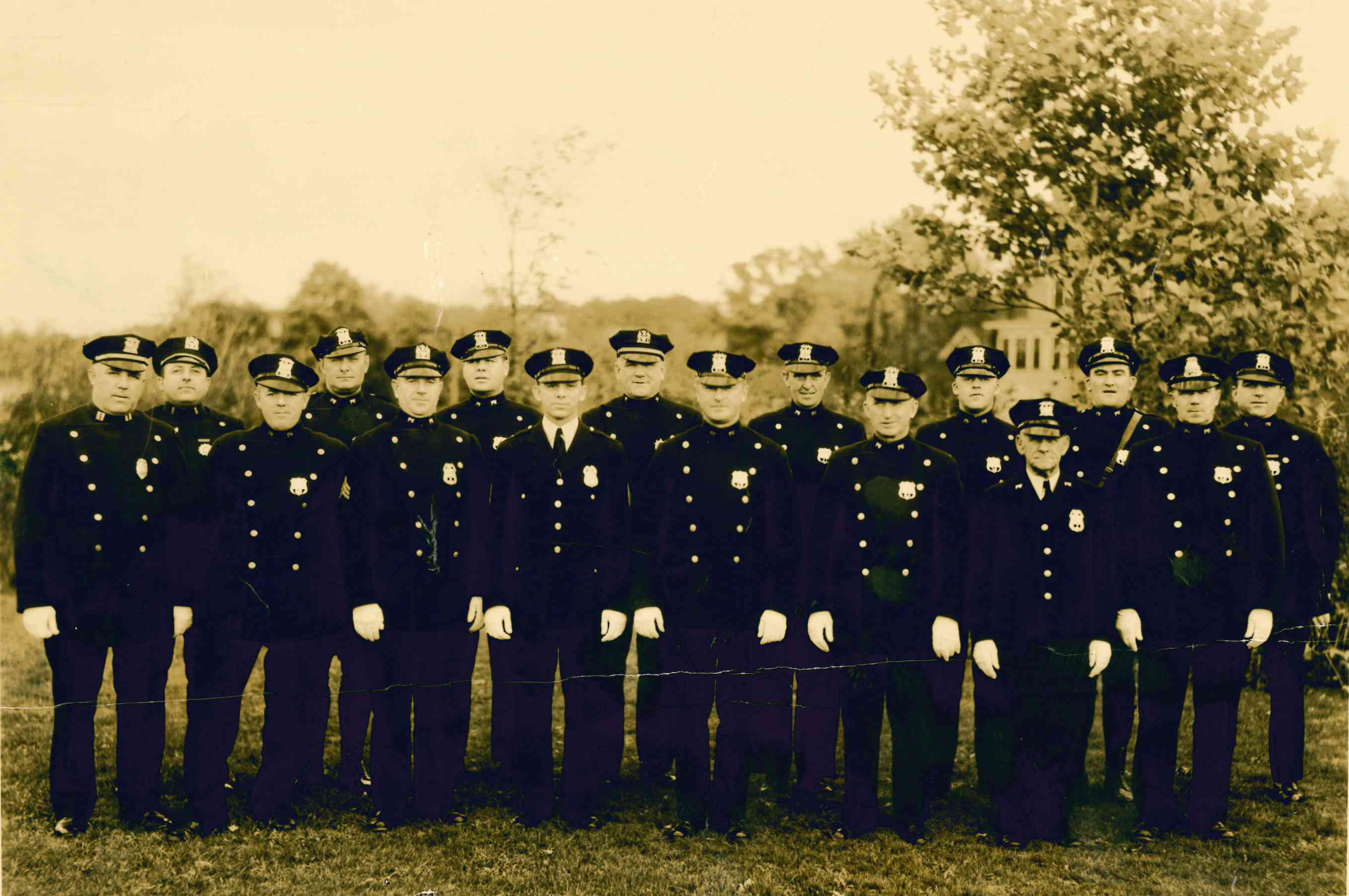 The first Chief of the Department was Frederick J. Snow, a retired battalion chief of the New York City Fire Department who moved to South Maryland Avenue in Port Washington in 1904. He served for a short period as a captain of the Long Island Railroad Police.

The remainder of the Department consisted of a day clerk, Miss Mortimer, and a night clerk, Elwood Stuyvesant (later replaced by Miss Ivanella Cocks and Ellwood Hults) who acted as desk officers. These civilian employees worked twelve-hour shifts, women 8 AM to 8 PM, men, 8 PM to 8 AM. There were six men on the force, one lieutenant and five patrolmen. The force worked without days off, but was allowed ten days of vacation a year. This small force was required to turn out all men for every general alarm fire regardless of tour worked. In addition, for the first three days of sick leave, only half pay was given. Later, as the men received a long swing, one day off out of every fifteen, they were required to work that day as payroll guards from 9 AM to 2 PM for the big business doing sand mining in town. All these duties were normal and accepted for Patrolmen earning $1,500 annually.

The five patrolmen were given bicycles for patrolling and answering calls. The Chief and the Lieutenant were given model T Ford to ride in. The only means of contacting the patrolmen was by a green lighted lamp hung over each call box. These boxes were placed throughout the village, including the residential district. The village, at this point in time, was still a beautiful rural town. Traffic was just a trickle and horses were still drawing milk wagons.

The community of Port Washington established its own Police Department before the establishment of the Nassau County Police Department. Prior to 1922, Port Washington managed to get along with one constable, Isaac Smith, who had Police powers. However, it was impossible for one man to work around the clock seven days a week and give the community proper Police protection. With a population of five to six thousand there was very little crime. But with a rapidly increasing population and more universal use of the automobile, it was felt that a larger, more adequate Police force was needed. A wave of burglaries struck the heights section of town during 1919-1920, and residents of this upper middle class neighborhood become alarmed. Meetings were held to explore remedies to make people feel secure in their homes at night.

At the urging of residents, and with the assistance of local politicians, a bill was introduced in the State Legislature in Albany to create a “Police District” in Port Washington. After passage of the bill, the Port Washington Police Department was established in November of 1921 and began operation on January 1, 1922. The Police Department had no headquarters of its own until 1923, when a building was erected next to the sewer district office at Sunset Park on Main Street. The original headquarters building still stands today, housing the Port Washington Police Athletic League.

In 1925, under an opinion obtained from the State Attorney General Albert Ottinger, the creation of the Nassau County Police Department eliminated all special police districts wherever formed. At the Town Board meeting in October of 1925, the budget presented by the Port Washington Police Commissioners was temporarily held up, it being the opinion that remedial legislation would be needed in order to avoid a double tax for police protection. This problem would not be resolved for eight years.

In 1926, the Commissioners appointed Philip N. Grosbeck, a retired New York City Police Captain, as Chief of Police. This was to bring city police methods to Port Washington. In 1928, Chief Grosbeck retired and Stephen J. Webber, a former Army Provost Marshal at Mitchel Field, was appointed Chief. He headed the department for fourteen years, during which time the size of the force increased to twenty men. Radios were added to patrol cars, receivers only at first, with acknowledgment over the nearest call box. Later, two-way radios were installed.

It was in 1933 that the official status of the police district was finally legislated. At a special election held on August 2, 1933, voters of the Town of North Hempstead approved a proposition to retain the special police district by 4,086 to 2,221 majority. The Port Washington Police District was confirmed as a separate unit on May 28, 1934, when the late Governor Herbert Lehman signed a bill authorizing the town board to appoint three commissioners to conduct the District’s affairs. The bill transferred supervisory powers from the town board to the three commissioners. The Governor had previously vetoed the bill, but a delegation headed by Police Commissioner (later Town Supervisor) Hartford Gunn went to Albany and induced the Governor to rescind his veto.

Over the years, many innovations and many new personnel have been added to the Port Washington Police Department. Under the direction of William J. Kilfoil, Chief of Police since 1993, as of May 2008, the force now consists of sixty six sworn officers, (this includes the Detective Division, Juvenile Aid Bureau, Gang Unit, Narcotics Unit, Traffic Safety Enforcement Unit (3), School Resource Officer (1) and Community Liaison (1). There are thirteen school crossing guards, three dispatchers, one parking meter attendant and four civilian personnel for a total staff of 87. The department maintains a fleet of 31 vehicles, which includes three motorcycles.